... She's dancing in the Rain with the hand in the Toaster 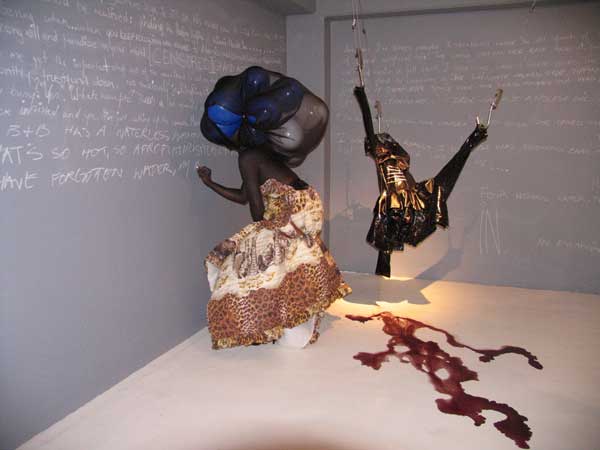 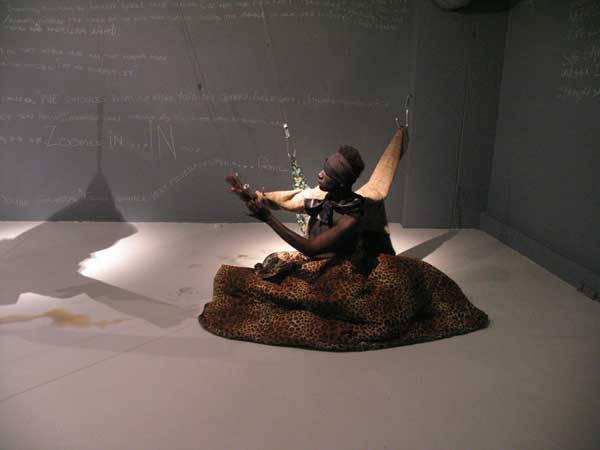 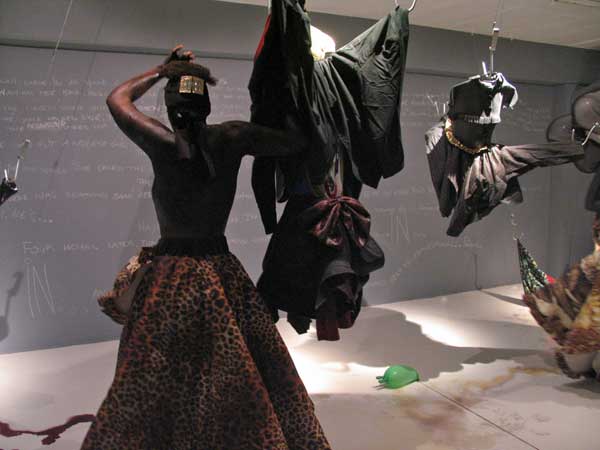 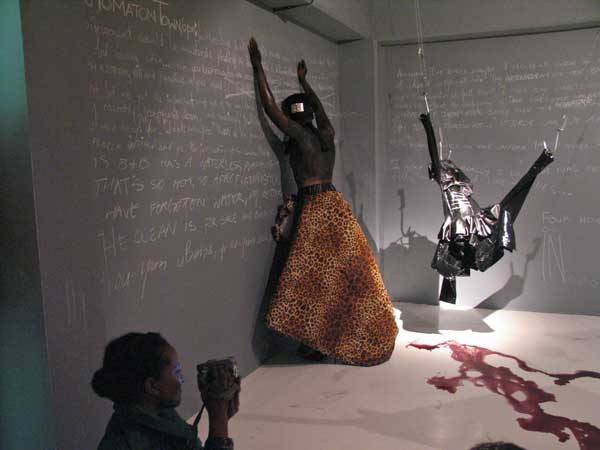 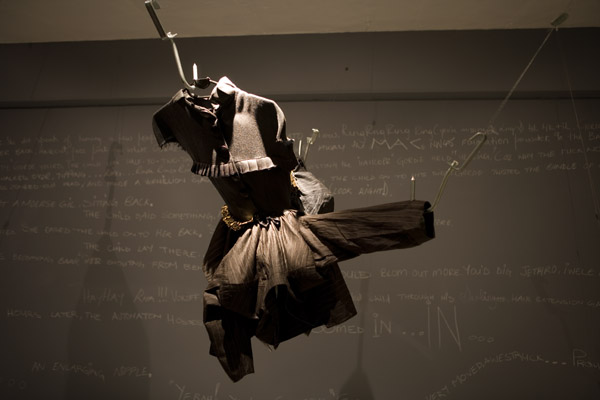 In my father's house there are many mansions
otton, flax, lamé, butcher's hooks, canola oil
2007 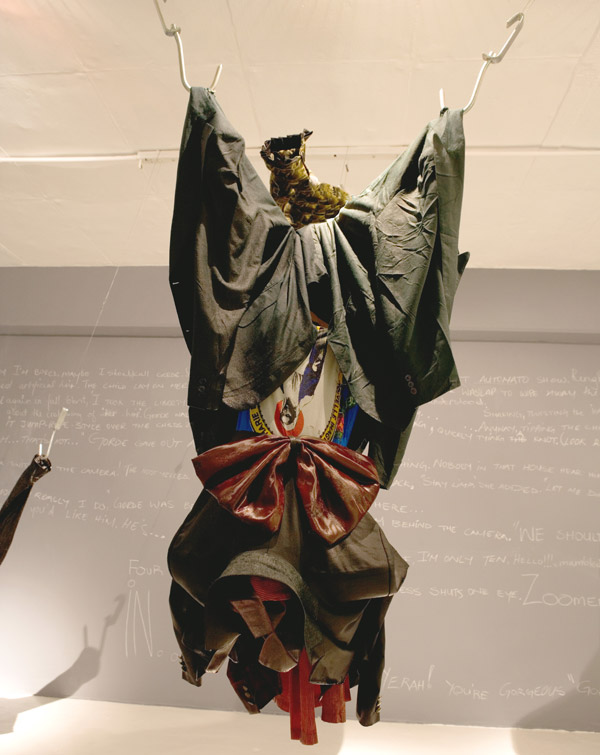 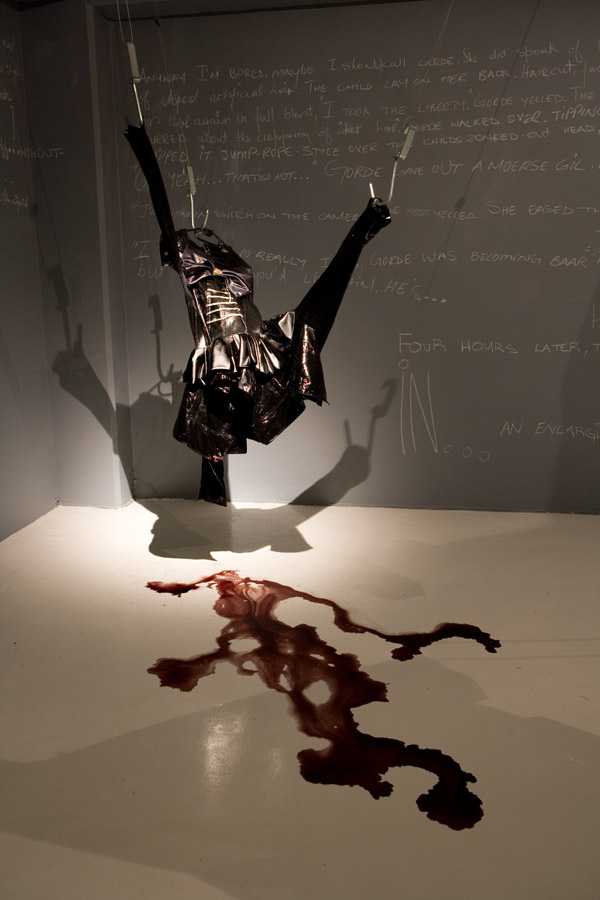 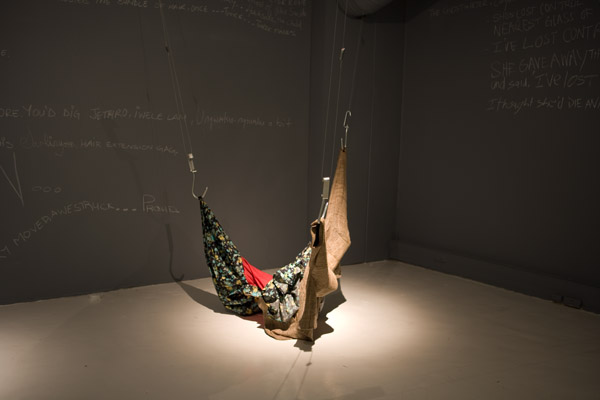 Get in the car, I am your mother's friend
raw gerge silk, liberty print, cotton, butcher's hooks, canola oil
2007

VIDEO 4 June - 7 July 2007
Michael Stevenson is pleased to present She is Dancing for the Rain with her Hand in the Toaster, Athi Patra-Ruga's first gallery exhibition. Besides being active as an artist, Ruga owns a clothing label, Just Nje/Amper Couture, which only produces unique pieces. Born in 1984 and trained as a fashion designer, Ruga's debut collection Die Naai Masjien was showcased as a nominee in the Elle New Talent Show at 2004 South African Fashion Week. Since then, the radical nature of his work has caused it to slowly drift away from the fashion industry into a more elusive realm.

An installation of garments suspended from butcher's hooks forms the centre of the exhibition. The clothes, designed by Ruga, carry names such as Get in the car, I am your mother's friend, suggesting an undercurrent of abuse. They are drenched in Rapeseed (canola) oil, an ordinary cooking ingredient but also used as a substitute for lubricant in working-class communities. The darkness of these dripping outfits is offset by frivolous details, such as zebra-striped gold lamé frills that recall the late Brenda Fassie's iconic aesthetic. On the surrounding walls Ruga has created a new version of I Apologise, a improvisational text-based piece recounting a warped moment in the production of child pornography that is directed by a bionic hostess who can heal dis-ease with her body.

Athi-Patra Ruga
Cape Town, Western Cape, South Africa
Exploring the border-zones between fashion, performance and contemporary art, Athi-Patra Ruga makes work that exposes and subverts the body in relation to structure, ideology and politics. Bursting with eclectic multicultural references, carnal sensuality and a dislocated undercurrent of humor, his performances, videos, costumes and photographic images create a world where cultural identity is no longer determined by geographical origins, ancestry or biological disposition, but is increasingly becoming a hybrid construct. A Utopian counter-proposal to the sad dogma of the division between mind and body, sensuality and intelligence, pop culture, craft and fine art, his works expresses the eroticism of knowledge and reconciles the dream with experience.